It's been a big week for comings and goings here. Adrienne Fiakas, who interned at the farm and has been hired on for next season, came back early this week -- she'll be staying with us two weeks before heading back to the big city for the last of her vacation time before our season starts in March. And Helen and Rick fly out tomorrow for a month in sunny Belize, their annual vacation, as always specially timed to leave the rest of us with the worst possible weather. None of us grudge them their well-earned rest, however (much), and we'll do our best to keep things rolling smoothly in their absence.
at 9:44 AM 13 comments:

Cows in the Snow

It's been a quiet week here on the farm; our only real excitement was the purchase of a new tractor which had all the boys running around arguing over who got to drive first. Those of us less enamored of heavy machinery have been staying prudently inside and trying to keep warm.
Unlike us frail humans, cows aren't much bothered by snow. Because they're ruminants, their digestion gives off enough body heat to keep cattle perfectly comfortable when it's chilly. A cow in winter doesn't want to be inside -- she just wants more food! For the curious, we've got a few pictures of our girls in the snow up in our photo album: 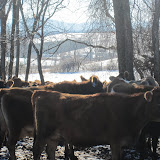 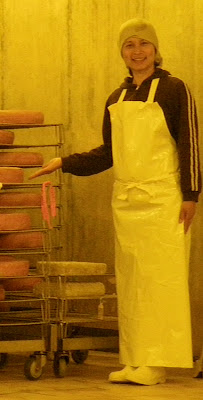 Rather than complaining about the weather this week (again), we thought we'd instead offer you a profile of one of the few people who've stuck with us through the bad weather... Laddawan (Da) Bryant, our cellar manager. Da originally hails from Surin Provence in Thailand, but came here two years ago after marrying an American. We started her in on the never-ending task of washing the cheeses in the cellar -- work that has driven many a gung-ho youngster away  -- but rather than being bored by the long hours surrounded by nothing but cheese, Da was fascinated. She was constantly asking us why this happened or that cheese did that. She quickly developed a strong understanding of the slow but essential process of aging, and for the last year has been managing the cellar almost single-handedly. There isn't a cheese we ship out that hasn't benefited from Da's hard work and unwavering attention to detail. We've always said that our cheeses were made in the cellar as much as in the cheeseroom, and there's nothing that's proved it more than having someone as hard-working, cheerful, and competent as Da on the job.
at 1:48 PM 18 comments: